What locks do I have? Timber Doors

Locking mechanisms on doors are varied and it can be difficult to judge whether what you have is good, bad or indifferent.

This information takes you through the common types of door locks for timber doors.

Ultimately what you need is a combination of locking mechanism that gives you flexibility and convenience for entering and exiting your property, but also providing you with additional security at night time or if you are away on holiday.

Whenever you move house and inherit somebody else’s security choices you should ensure that what you have meets your needs and ultimately provides you with the most appropriate security level versus your budget.

Generally speaking a single point locking locks the door in one place. In comparison to a more modern multi-point lock that has a number of hooks, bolts and rollers alongside the face of the door.

Used in traditional timber or composite doors a Mortice Lock is embedded in the door for extra strength and provides a locking point in the centre of the door.

Available as either a deadlock or sashlock; and can have traditional key locking or euro cylinder operation.

Mortice locks use levers and it’s the combination of these levers that give the lock its security.

So a 5 lever mortice lock will meet British Standards for security whereas a 2 or 3 lever offer minimum security.

A lock with an automatic latch bolt which is withdrawn on the external side of the door by a key and from the in side by a handle or knob.

Night latches can be morticed into the door edge, or more commonly fitted as a rim latch, i.e. onto the face of the protected side of the door.

Generally speaking they are available as a 40mm or 60mm backset lock.

A simple access control lock, usually operating a mortice latch that is operated via a code entered into a key pad on the non-protected side of the door.

Egress is usually by a lever or thumb turn on the protected side.

A lock mechanism incorporating a deadbolt only.

Deadlocks can be operated with a lever mechanism; cylinder operated, and can incorporate a thumb turn for keyless egress/emergency exit applications.

A lock mechanism incorporating both a latch and deadbolt feature.

Sashlock ’s can be key operated with a lever mechanism; cylinder operated, and can incorporate a thumb turn for keyless egress/emergency exit applications. Typically used with a lever handle set.

A self-engaging element of the lock that secures the door when engaged with the keep, and can be released by hand.

A bolt that is operated in both directions by a key, handle or thumb turn.

The difference between locks of similar design, achieved by the levers, which allows each lock to be operated by its own key.

Has a central cam that rotates, upon turning of the key to operate the lock mechanism. Cylinders are available in a number of profiles, though the Europrofile and Oval shapes are by far the most common for single point locking mechanisms.

Cylinders can be supplied with a thumbturn fixture on one side to enable operation of the lock without the use of the key from one side of the door.

The security of a lock cylinder can vary greatly, with options for the number of differs, drill resistance, plug extraction, pick, bump and snap resistance all being options. Additionally, a number of supplementary hardware devices have been engineered to provide additional resistance to attack, including cylinder guards and security handles.

A feature of higher security locks and cylinders, that resists forced entry through attack by drilling of the cylinder mechanism or lock case.

A plate used to cover a functional element of the lock, usually the cylinder or lever key way. Escutcheons can be face fixed or bolt through and can be purely decorative or provide additional resistance to forced entry as a security feature.

The square drive bar, usually 8mm in width that is positioned through the lock and locates into the handle set levers, or knobs. Operating the lever rotates the spindle, which in turn operates the drive (follower) of the lock.

Spindles for specialist locks such as mechanical digital locks can be of more complex shapes to facilitate the correct operation of the lock.

The required length of the spindle is dependent upon the thickness of the intended door and depth of the receiving element of the handle l ever.

The vertical dimension between the lock spindle and the centre of the key way of the gearbox. Centres can vary between lock systems, though the ERA range has a standard of 57mm.

Understanding the lock centre dimension is critical for specification of the correct handle.

A rectangular recess along the edge of a frame to receive the corresponding door leaf.

Rebates are also machined into the meeting rails of double doors to provide closing faces for the corresponding leaves.

Generally speaking a multi-point lock that has a number of locking points along the edge of the door.

These locking points are centrally controlled and engage when the handle is lifted/thrown securing it to the frame.

Multi-point locks can use a combination of latches, hooks, rollers, mushrooms and bolts; and as standard are operated with a Euro Cylinder.

Is a new multi-point lock solution that offers all the benefits of multi-point locking-rollers, mushrooms, hooks and bolts; but removes the vulnerable cylinder thereby overcoming all associated issues – No Cylinder, No Problem!

The Vectis lock has been designed to overcome the associated problems with cylinders by instead using levers from traditional and trusted mortice locks with anti-jemmy multiple locking points along the whole face of the door.

The dimension from the lock faceplate to the centre line of the cylinder or keyhole.

(This definition is different for traditional mortice locks)

The dimension between the lock spindle and the centre of the keyway of the gearbox.

Centres can vary between lock systems, though typically, the UK standard is 92mm.

Understanding the lock centre dimension is critical for specification of the correct handle.

The metal part of the lock that is visible on the edge of the door leaf.

ï»¿These can vary in width to suit the application. 16mm is typical for PVCu to suit the eurogroove channel, 20mm is common for timber and composite doors.

The chamfered part of the lock usually in the central gearbox, which initially engages to hold the door in the closed position when shut. The latch is spring loaded and retracts when it makes contact with the striking edge of the keep, and then extends when aligned with in the keep.

Latches are typically deadlocked once the lock is fully engaged (locked) and are reversible by removing the screws on the external face of the latch and then rotating the latch–screws are then re-inserted.

A plastic part on the lock that allows the latch to be held in its withdrawn position, thus preventing it engaging within the keep. This is normally used in conjunction with a nightlatch (lever/pad) facility to temporarily prevent the door from being locked when closed.

Hooks provide a steadfast locking point for a door. When thrown they extend into the keep and due to their shape and the geometry of movement, engage behind the keep plate to provide anti separation.

Some multi-point locks have hooks that throw/move in the same direction, and whilst this provides resistance to horizontal separation, there is less resistance to lifting the door. Bi-directional hooks (movement in opposite directions) provide the optimum security as they effectively clasp the leaf into the outer frame.

Linear bolts extend horizontally into the keep, with greater penetration than a roller and can be effective for door sets with small gaps (4mm or less) between the frame and the door.

Rollers are often used for weathersealing on PVCu doors; and are a cylindrical shape. They generally also often an adjustment feature to enable the compression of the sash against the frame to achieve the appropriate weatherseal.

Mushrooms have an element that inter locks with in its keep to provide separation resistance of the sash from the frame.

Keeps are fitted to the door frame and the moving parts of the lock (hook, linear bolt or cam) locates into these when in the locked position. They often feature adjustable plates or pockets to allow for adjustment of the door once fitted. Keeps for roller cams usually feature a chamfered (angled) edge, to guide them into the keep (reducing the closing force required).

The square section drive bar, usually 8mm in width, which is positioned through the drive of the lock and locates into the handle set levers, or pads. Rotation of the lever/pad rotates the spindle, which in turn operates the drive (follower) of the lock. The length of the spindle is dependent upon the thickness of the door and depth of the handles lever.

NIGHTLATCH FUNCTION ON A MULTI-POINT LOCK

Gives the option for the entry into the house from outside requiring a key, even when the lock has not been fully engaged, this is to replicate the operation of a traditional nightlatch.

Gives you the nightlatch function on certain types of locks. The spindle is split, so that depressing the handle on the outside of the door does not retract the latch.

An alternative mechanism to the split spindle for providing a nightlatch function. An offset spindle lock has two drives, one of which retracts the bolts/rollers/hooks and latch, and one that will only retract the bolts and not the latch.

Typically in the UK the centres are set at 92 mm and 62mm. Used in conjunction with a handle where the inner and outer levers or pads are offset, so that the external handle will not retract the latch, the night latching function is achieved.

Multipoint lock gearboxes can be either sprung or unsprung. With a sprung gearbox, the drive mechanism is spring loaded, so that when the lever is depressed and released, the handle and latch are returned to their original (at rest) position by the spring within the gearbox.

Unsprung gearboxes require the use of sprung handles (handle sets with spring cassettes) to return the lock drive from the depressed position, thus re-engaging the latch. Spring cassettes are also used in certain handles, where the weight of the lever is too great to allow the integral spring within the gear box to operate effectively in isolation.

This is typically the case with solid cast levers and extended levers for disability use.

The rotating operating element of the handle. Handle designs can vary from plain straight levers, to decorative swan neck, twist and contemporary designs. Additionally, extended levers can be used for disability complaint applications to reduce operating forces of the lock operation.

A handle type, typically used with offset or split spindle operation (though not exclusively) that is designed to mimic a traditional knob aesthetically, whilst having conventional lever operation.

The element of the handle that is fixed to the door.

Back plates can be face fixed, i.e. the inner and outer handle screw into the face of the door independently, though most multipoint handles use bolt through handles, where the outer back plate has a screw lug for receiving the screw fixing from the inner handle. 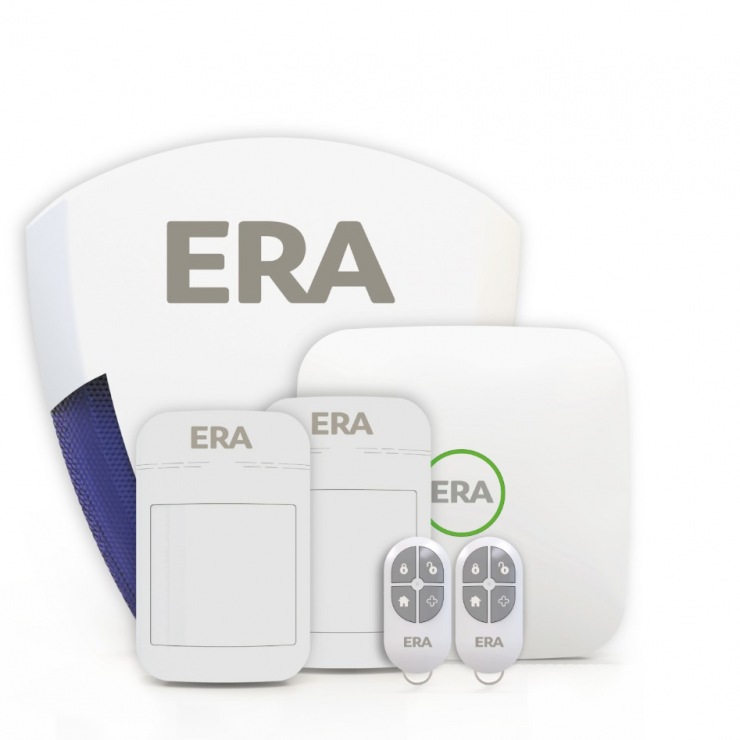 Why ERA Protect is the Best Alarm System for You

ERA Protect is the first home security system of this type to be awarded the highest level of...