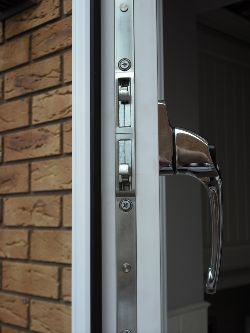 Tested Beyond With its latest high-security window lock, security hardware specialist ERA claims a new benchmark in strength and durability. Under exhaustive tests, the Fortress multi-point lock (MPL) has not only outperformed all other window locks but also proved to exceed the increased force requirements of door lock security standards.

Putting all of its security expertise behind the design of Fortress, ERA, part of Grouphomesafe, made full use of the company’s in-house UKAS test house during the research and development process. In testing the lock to the PAS 024:2012 standard, ERA established that the lock could withstand both the 3kn force requirement for windows and the 4.5kn force requirement for doors. In fact, the Fortress window lock withstood almost double the force requirement for doors. The key to this outstanding performance is the fact that the lock is designed with a number of bear grip locking points which fully engage into the keeps to even out attack loads applied along any significant area of the sash.

Describing Fortress’s performance, ERA’s Product Manager for window hardware Kerry Blackford says: “Our aim in developing the Fortress window lock was to offer the best window security that we possibly could. We see no reason why window locks should be easier to force than door locks – and no reason why a window lock should compromise the security of a home when it is possible to design and build a lock that greatly surpasses the standards.

“The PAS024:2012 manual attack test is extremely aggressive, but it really demonstrates the potential threat by a determined burglar. The would-be attacker uses a range of tools to manipulate the window and the test lasts up to 15 minutes in total, during which the window has to resist all attempts to gain entry. The Fortress easily surpassed these test requirements and proved to be even stronger than a door lock tested to the same standard.

In designing the Fortress MPL, ERA also looked at durability to ensure its long-term integrity and functionality. Achieving in excess of 50,000 cycles, the lock proved to have the potential to last well beyond the anticipated lifetime of a window. The materials selection focused on those proven to perform and in corrosion testing, the lock also achieves the industry-recognised European and British standards.

While the Fortress MPL offers the ultimate in security for the householder, its design also takes into account the practical needs of the fabricator and installer. Its has minimal gearbox preparation, reduced fixing screws to minimise fabrication time, making it quick and easy to build a window using Fortress while for installers, the lock is designed for fast, straightforward and on-site set up that’s safely adjustable.

For a salesperson, the first fully retractable bear grip lock on the market ensures clear differentiation with visible added value when it comes to selling windows; and we are so confident about the security of this product, it’s covered by Grouphomesafe’s Security Guarantee.

For more information on the Fortress window MPL, contact ERA on 01922 490000 or visit www.era-security.com/takealook